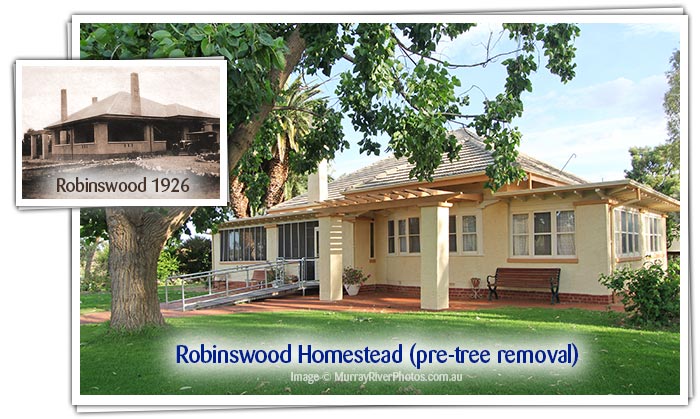 The Homestead is situated in McLennan Drive and is a very well preserved building showcasing a home that was modern by the standards of the time. The rendered concrete walls, roof tiles, and leadlight windows and doors are all original. An immense mirror in the entranceway has only recently been returned to the Homestead by the family in Melbourne, after having been removed in the 1940’s.

The land surrounding the home still contains shrubs and trees that were planted at the time Robinswood Homestead was built. Several citrus trees and a bougainvillea on the grounds were part of the original extensive gardens. Two large peppercorn trees on the road next to Robinswood mark the site of what was a drop-pine log house that was demolished to make way for Robinswood. 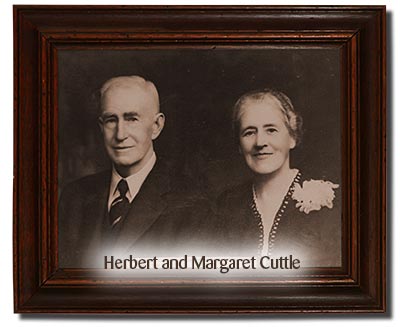 In 1919 Bert (Herbert) Cuttle and his wife Margaret brought the square mile of freehold (pre-emptive rights) of Bumbang Station. The Cuttle’s envisaged a township and had architects plan for a town and also their retirement home, here on the site of Bumbang Station.

On October 23rd, 1924, the township blocks were sold by auction and the town received its name – ‘Robinvale’.

In 1926 the old drop-log pine homestead at Bumbang, was demolished to make way for the new homestead – Robinswood. Robinswood was architecturally designed and built on a very modern concrete ‘raft’, with double brick cavity walls.

Water was heated by a copper coil in the firebox of the wood stove and kept in an insulated storage tank. Hot water was piped to the kitchen and bathroom.

There was a cellar for cool storage. Rainwater was stored underground and pumped up over the kitchen sink.

The roof tiles, folding door and decorative windows are original; woodwork being stained instead of painted as it is now. The floors were polished wood with carpet squares.

Mr and Mrs Cuttle moved from Ultima to reside at Robinswood. The garden was planted with assorted fruit trees and vegetables. There was a fowl run and always a cow called ‘Strawberry’.

As was the custom of the times, the laundry (was house) and the garage were well away from the house (because of the risk of fire).

The front and side gardens were planted with roses, honey-suckle, bougainvillea and geraniums.

The was no road between the house and the river and the front of the house was a large circular lawn where croquet was played.

Mr Cuttle cut broad steps, reinforced with logs, into the steep riverbank to give easy access to the rive and his boat. Robinswood was a great holiday place for the grandchildren. Fishing was excellent. The river was clear and sparkling. Opposite Robinswood, slightly upstream of ‘The Cut’, was a beautiful sandbar where the family picnicked, swam, rowed or sailed.

The Cuttle’s were also great readers. They enjoyed fortnightly boxes of books from the State Library and periodicals from England.

Robinswood was the centre for family gatherings and a meeting place for all people interested in the progress of Robinvale. With piano, player piano, gramophone, cards, mah jong and the ever-ready ‘cuppa’ all visitors were welcome. 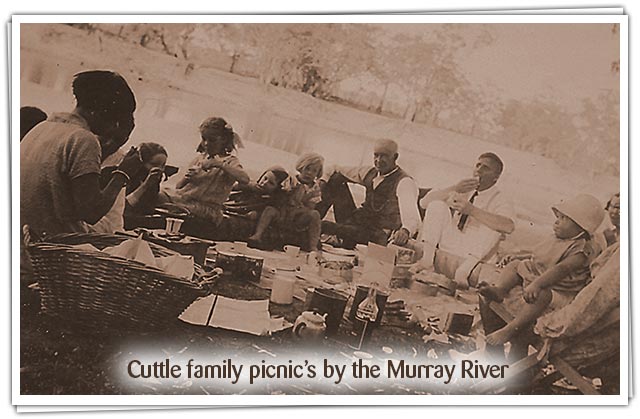 1960s: Robinswood was sold to the Shire of Swan Hill and after years of being used as rental accommodation, it had become badly neglected. A group of local ladies persuaded Cr Bill McGinty that it should be restored and preserved. Shire Councillors agreed and money was made available for the restoration and refurbishment of Robinswood.

2007: Robinswood is again a meeting place, enjoyed by many local people and visitors. It is a centre for teaching arts and crafts; an annual patchwork display is held here.

Robinswood is a regular meeting place for groups such as Robinvale Patchwork Friends, Robinvale Probus Club, Spinners and Weavers and can be used for many, varied occasions.

Robinswood was managed by the Robinvale Arts Club for many years. In June 2006, a public meeting was held to form a new Management Committee and the Robinswood Homestead Association was formed. This group assists Swan Hill Rural City Council with the day to day running of the Homestead.

The Cuttle family enjoyed welcoming visitors from the community to their home for cards and music, and Robinswood is still utilised extensively by the general public as a venue for craft groups and meetings and for special events such as small weddings, and patchwork and doll displays. It is available for hire as a function space with catering facilities available.

The Cuttle room in Robinswood Homestead contains loaned memorabilia and mementos of the time and shows some of the history of the house and township as it was.

As part of your trip to Robinvale-Euston, take time out to step into the past and visit Robinswood Homestead, overlooking the beautiful Murray River.