Enjoy reading about the full history of Robinvale-Euston

Long before Europeans settled the Robinvale area it is believed that the land was inhabited by the Latje Latje Aboriginal tribe. Reminders of their occupation remain today on the Bumbang Island Reserve, just north-east of the town, where evidence of burial and camping grounds and canoe trees can still be found.

The first recorded European exploration of the area was the expedition of Charles Sturt in 1830. Major Thomas Mitchell passed through during his Australia Felix expedition of 1836.

In 1847 the ‘Bumbang Run‘ was taken up by John Grant over 19,000 acres of land, including the future Robinvale township site, and was managed by his family for years until it was purchased by Mr A.J. Creswick about 1890.

The creation of channels and dams brought permanent water away from the River but only onto small holdings of land. Wheat crops were grown from the late 1800’s. However, pumped irrigation water was not commonplace until after World War 2.

In 1912 Herbert E. Cuttle, the founder of Robinvale, bought land in the Robinvale area, which his 16 year old son, Robin, managed until the outbreak of WWI. In 1921 Herbert purchased the land under Bumbang pre-emptive right title, had it surveyed and subdivided and established a township. He named the town Robinvale, in honour of Robin, who was killed in air combat near Villers-Bretonneux in France during WWI. 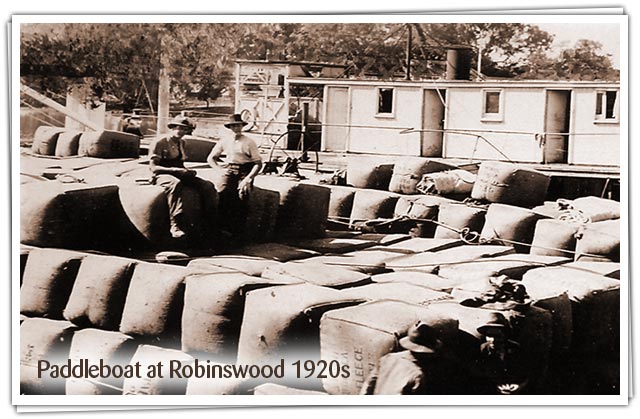 The Robinswood Homestead was built by the Cuttle family in 1926, as their retirement home, and historic home remains in town today.

In 1928 the (first) bridge connecting Robinvale and Euston was erected, replacing the punt that had previously joined our two towns. With the building of the bridge, and planning for Lock 15 on the Murray River, an auction of town allotments was held, and the town was born.

After WWII Robinvale developed rapidly after the surrounding land was acquired and parcelled up as part of the soldier settlement scheme, and was principally used to grow grapes and citrus. A total of 246 fruit-growing blocks which were allocated to eligible ex-servicemen.

Migration saw many European nationalities, but mainly Italian migrants, move into the area. These new residents diversified the local produce to include vegetables, olives and almonds. The small town of Robinvale, around 135 kilometres north-west of Swan Hill, remains a culturally diverse community today, with recent arrivals from the Pacific Islands and Asia further enhancing the multicultural mix. 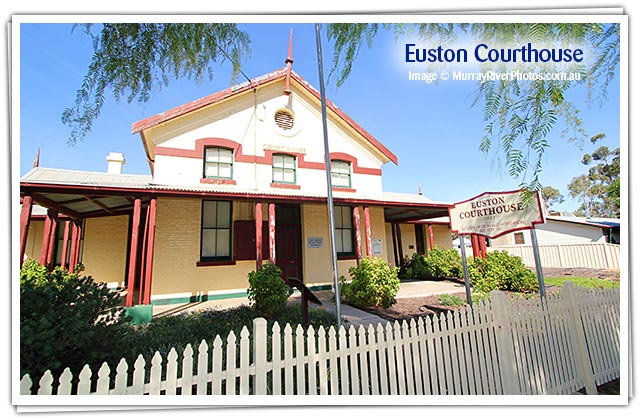 Visit the Old Courthouse which contains photographs and memorabilia of the district plus a small one-room museum dedicated to the Bush Nursing Service. Open 1pm to 5pm on the first Sunday of the month or by request.

The Courthouse at Euston has been home to the Euston-Robinvale Historical Society since 1981 when the Society was founded. The aim of the members is to house and preserve written and photographic material relating to the history of the two towns and their surrounds.

October 2008 saw the 125th anniversary of the Courthouse. An open day featuring mock trials and re-enactments of actual cases from the 1880’s took place at the commemoration.

Members of the Society meet at the Courthouse on the 3rd Tuesday of the month from 10am-12noon. Visitors are welcome to have a look around the Courthouse and view or purchase publications about the history of Robinvale Euston.

Whilst in Euston, take a stroll through the township and view the six plaques that have been erected on sites of historical significance. Each plaque is accompanied by photo and text describing a time and place in the history of Euston.

The plaques are located at the following places around Euston: at Euston Court House, opposite the Royal Hotel, at Euston Public School, on the road outside the Euston Club, with two plaques along the Murray River’s edge at the car park near the River at the bottom of the Euston Club Resort.

The role/aims of the Society are to obtain, secure and retain photographs, written material, letters, reports and any other relevant material concerning the history of the district from settlement to the present day.