The Mungo area was recognised in 1981 because of the importance of both its geological past and its record of Aboriginal settlement dating back 40,000 years.

The area is isolated and bush camping facilities are available at two sites only. Visitors are asked to bring their own water, food and sufficient fuel for their return journey, at least 300km. Wet weather can make roads impassable so check with the National Parks Service Office in Buronga.

Near the entrance to the park is a woolshed and a Visitor Centre, which outlines the physical and cultural history of the National Park. The Mungo Woolshed is open to the public. It was built in 1869 of Murray pine and serves as a reminder of the important role of the pastoral industry in the recent settlement of this area of western New South Wales. In the 1850s Mungo was part of the larger, Gol Gol Station.

In 1922 the station was subdivided into small holdings under the closer settlement scheme, a scheme that allowed returned soldiers from World War I to settle on the land. One such unit became ‘Mungo Station’ of 16,000 hectares (40,000 acres). The property changed hands in 1934, and then in 1978 it was acquired by the New South Wales National Parks and Wildlife Service and listed as a National Park in March 1979.

Mungo occupies much of an ancient lake bed, Lake Mungo

During the ice ages it was part of a series of lakes, the Willandra lake system, which drained into the Darling River. Around the eastern shores of these lakes huge sand-dunes once existed consisting of sand and clays, which were progressively deposited on the dunes as the lakes dried up. Today the surrounding country has vegetation such as belah (casuarina) growing on the old dunes, bladder saltbush on the ancient lake bed and mallee in dune areas.

To the east of the lake bed are the remains of the sand-dunes called The Walls of China, named after the Chinese workers who constructed the shearing shed on Gol Gol in the late 1860s. These sand-dunes are over 40m in height and stretch in an arc for approximately 40km. They have been eroded into fascinating shapes of pillars and gullies and have colours ranging from red-orange, red-brown to cream-yellow.

Wildlife abounds. Species ranging from red and western grey kangaroos, echidnas, native mice and bats, lizards and of course a few species of snakes are found. The birdlife is prolific including emus, orange chats, pink cockatoos, falcons and other birds of prey. 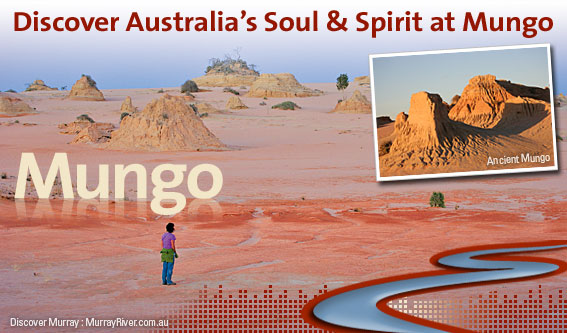 The Willandra Lakes system dates back to some 50,000 years before present when the lakes were full of water and the sand-dunes developed during a cold, dry and windy climate. As the climate became warmer, around 20,000 years before-present, the lakes began to dry for the last time.

Human habitation 30,000 years ago It was in this landscape that the most fascinating and important finds were made; the cremated remains of a woman (of 26,000 years ago), a tall male (estimated to have lived 28,000 to 30,000 years ago) and numerous animal remains. These ranged from Procoptodon goliah an extinct giant short-faced kangaroo standing over 2.5m tall; hairy-nosed wombats and wallabies. 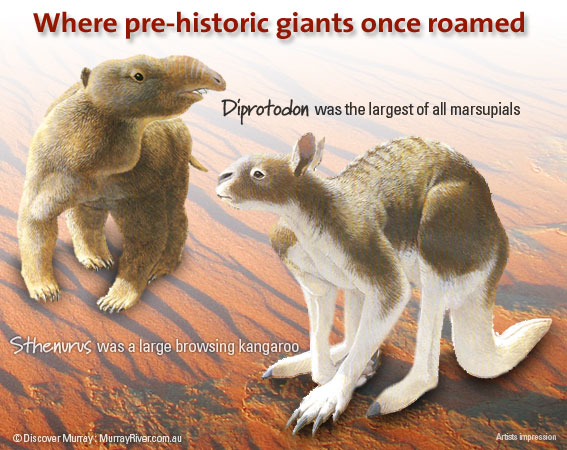 The diet of the first human inhabitants included Murray cod, golden perch, shell-fish, emu eggs, wallabies and small marsupials. Archaeological studies uncovered the first known use of ochre in the world, and have enabled further understanding of ancient cultures. It was to ‘Lake Mungo country’ that the burnt, mineral-encrusted remains of ‘Mungo Woman’ were returned early in 1992, to be reburied in ‘her’ lands. It was because of ‘Mungo Woman’, Aboriginal heritage and records of past climate changes preserved in the landscape that Willandra Lakes World Heritage Region was established in 1981.

National Park Visitors Centre provides the information needed to understand the region’s natural and cultural history. It is located at the park entrance.

There is only one public road within the park. Between the entrance and the Walls of China it is suitable for two-way traffic, but after that, for some 50 km it is one-way only. Camping is permitted within the park only at designated areas near the entrance and at Belah Camp. Picnic facilities are provided at Walls of China, Rosewood, Mallee Stop, Round Tank and Vigors Wells. 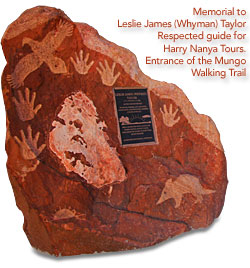 The Walls of China stop provides the visitor with a chance to walk amongst geological history and view from the top of the dunes the vast expanse of Lake Mungo. Early morning is an excellent time to appreciate the landforms and animal life. All animals and Aboriginal artifacts are protected by law, so please do not disturb or remove anything. Walking tracks are provided.

How to get there:

Towns and parks north of Robinvale-Euston

Heading north of Robinvale-Euston you can explore our wonderful Murray Mallee region and National Parks. Some of these include: