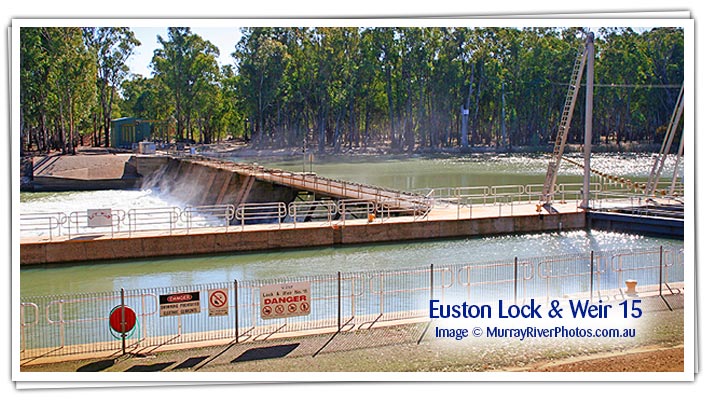 A short drive out of Robinvale sees the location of the Euston Weir and Lock 15 off Pethard Road. This is a fascinating insight into an aspect of the Murray River.

BBQ facilities, shelter, lawned area and an amenities block ensure that you can take your time to admire the view from the height of the hill and learn about this important construction from the staff that may be on site. (For those that might not know it, a lock is for boats to be able to navigate up and down stream, and a weir is a holding area for water.)

Construction of the Weir commenced in 1932 and was completed in 1936. The weir pool itself stretches back 60 kilometres to Meilman East. In 1987 the original timber barricades were replaced with steel and gates were added, and the operation changed from a manual to hydraulic one.

Lock 15 is managed by an agreement between New South Wales, Victoria and South Australia with the Murray Darling Basin Authority. The management of the river is shared so that no one State has full and total control over the water. Prior to this agreement, communities downstream were disadvantaged by decisions made upstream.

The management of Lock 15 and the weir at Robinvale includes maintaining the daily level of the weir pool at a constant 47.6 metres above sea level (give or take 10 centimetres allowing for such factors as evaporation).

This is a manual operation performed by the Lock Masters. On occasion larger volumes of water are released in instances where algae bloom need to be flushed out downstream.

Originally the lock and weir was constructed for navigation of river cargo, but nowadays its main importance is for irrigation and recreation.

Wander down the hill to the river itself and find the post that marks the famous 1956 flood level. It is astounding to imagine that such a volume of water flowed at that spot 50 years ago.

Another of the important tasks performed by the staff at Robinvale is the monitoring of fish. The Fisheries Department takes its breeding stock of silver perch, perch, and Murray cod from fish that staff at Lock 15 collects.

Robinvale is only one of two places along the Murray that this occurs, because of the healthy size of the fish stock in this part of the Murray River.

The staff monitors the fish levels of perch, Murray cod, silver perch and carp using radio trackers which trigger a data logger as the fish finds its way through the Denall Fish Way (so named for the person who invented the system). Stand on the edge of the lock and look for a zigzag concrete shape rising up out the river on the far side of the weir.

That is the Denall fish way.

Its purpose is to mimic the current of the river allowing fish the opportunity to travel upstream where the weir wall would not allow them to get past. The fish that are tagged with tracking devices automatically trigger a response into a data logger which collects information such as what type of fish swam through, the time, the date, and the water temperature. This important information regarding the health of the fish stock in the Murray River in this area is then passed on to the Fisheries Department.

Things to do and experience in Robinvale-Euston